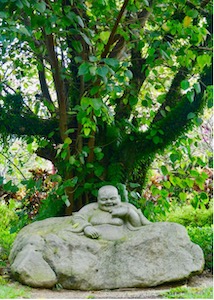 There’s a Buddhist concept called “the near enemy” that refers to unhealthy psycho-spiritual states that masquerade as healthy or desirable ones: pity masquerades as compassion; attachment as love; indifference as equanimity. Canadian author Louise Penny employs this concept in her detective novel, “The Cruellest Month,” where it provides Inspector Gamache with essential clues in a murder case. This 3-part sermon series introduces the concept of the near enemy through the characters in Penny’s novel and illustrations that might come from any of our lives. SPOILER ALERT: The identity of the murderer will be revealed in the first sermon in the series!

This week:
To the casual observer, indifference looks a lot like equanimity. But there’s an enormous difference between the balance that enables one to be untumbled by the vicissitudes of life and absence of the ability to care. Meditation and other spiritual practices offer paths to greater equanimity.